This is a continuation of The Power of Setting. It is not necessary to read one without the other, but it is highly recommended for highest Actualization. Suit yourself. 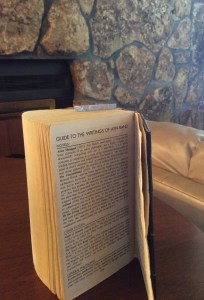 Have you ever been to a place and thought to yourself, this is just as such and such described it. Take Ayn Rand’s short novel, We The Living, for example. While Rand often garners the title of expert in the art of characterization, her skill in creating a setting in also noteworthy. When I first visited Russia I felt like I already knew the city because I had read her book.

We The Living is Ayn Rand’s first novel, although she had already produced at least one Hollywood play, and many scripts and short stories, and her most autobiographical. The novel is set around Kira, a young girl living under Communist rule in Soviet Russia. Rand herself living in Soviet Russia from the age of 12 to 20, and uses her first hand experience to depict the living conditions in Russia during this time.

Kira returns to the city of Petrograd right after the revolution between the reds and the whites ends in 1922. The city is in a dismal state, destroyed and ravaged by years of revolution and the corruption of communism. The first details that Kira notices are such things as the communist banners and the industrialization of the city

We are shown a world filled with weary citizens waiting in long lines, houses stolen by the state and converted into living complexes where mutiple families are crammed under the same roof. Many times families have only one or two rooms to live in. We see the lack of adequate heating, the small single stove in the center of the room that heats the whole cramped, small apartment. There are food rations, houses are crumbling, the streets are filthy, and many people are do not have enough money to survive.

So, is the world Rand creates an exaggeration of memory? Has Rand undergone a process of creative reimagination, or a reinventing of past memories intertwined with current, more recent memories of the present state of existence? Or, on a more general level, what role can literature play in describing places of the world?

While you may not be familiar with the Russian city Petrograd, you may know another one. The name Petrograd has a much different name today: St. Petersburg. Have you heard of it? Have you been there?

There is a reason that most of the images of St. Petersburg are of the gaudy Church of Spilled Blood, the Neva River 50 feet from the church, and a few other massive palaces and monuments. But, what about the rest of life there? What differentiates a traveler from a tourist, after all, is experience. Not the amount of places traveled to, or the time spent traveling, but the experience had. A tourist travels for sights. A traveler travels to assimilate and experience.

So, what are my immediate memories of Russia? Cold, vodka, desolation, and depression. Most of these things are summed up as sensory experiences. I remember a man on a bus collecting bus fares. He had a long grey, tangled beared. His face was fat, and he looked drunk.

I remember walking past the hollow outlines of former buildings, now mere crumbling walls standing broken against the frigid wind. And I remember the way Russia made me feel, the desperation that hung in the air, the sadness that stood unmentioned on the tip of everyone’s tongue. For me, it was perfect

I’m not a sadist. I don’t like to see people suffer, but this was the experience I expected months ealier when I planned my trip to Russia. The trip was memorable not because of the architecture, the landscape, the food, or the people. It was perfect because this was what I expected Russia to be.

While there is the satisfaction with having my values reaffirmed, the bigger reason was due to We The Living. Rand’s novel painted an ideal for what Russia should be, and Russia didn’t disappoint.

As someone who reads a lot it is nice to see a novel actualized in reality, meaning I like to see the reality behind a place as described in a book. Even though the world I saw appeared ugly, its alignment with my expectations made it remarkable. The ability of a novel to accurately depict the world during a certain time and with specific culture events occuring is one of the great values of literature afterall, a value losing traction in an increasingly visual world.

Finally, when literature exists and is capable of painting a world on paper as real as the one we can experience what is the point of travel at all? In answer, I ask you, can you reject or affirm these premises without first hand experience?