Greece is one of the most beautiful places I have ever laid eyes on. From the azul ocean and clear skies to the puffy white clouds and bright sun, the cities of Greece are made for the gods. Iris, the goddess of the rainbow, is said to be the messenger of the Olympian gods. Her father was a marine-god and her mother a cloud-nymph making Iris a goddess of sky and sea. The rainbow was her highway on which she brought water from the sea to the clouds, which then rained down providing the moisture for the living plants and animals. 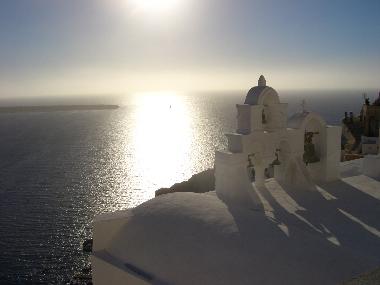 Grecian cities resemble the beauty of Iris. The white buildings mirror the white clouds in the sky. Historically the people built with stone and lava rocks then put together an off-white mixture made with asbestos to reflect the hot sun. Once paint was invented the cyclade-style buildings became a purer white as seen today. The blue highlights on church domes, doors and windows mirror the blue sea and accents the purity of the white.

One exception to this blue and white tradition in Greece is the island of Santorini. Before the strict rule of a military government in 1967 houses here were brightly colored like the rainbow of Iris. Unfortunately, most of them were required to be painted white during this government rule, but a few can still be seen today.

Blue and white remains a trademark of Greek Islands, and it is a rare beauty to see. The city streets and buildings look pure and clean like Iris washes everything on her way to the skies and then drops blue dye from the ocean to accentuate her work. Whether it is Iris or just a tradition of the Greek people, the blue and white is a lasting memory of this beautiful country.