Did you know that the world speaks to us constantly? Have you ever taken a moment to listen? What do you hear now? The hum of your computer, maybe music on the radio, or your desk chair squeaking beneath you. Remaining ever present in the world takes a lot of work, which is why we usually reserve a deep focus only in times when we think something matters most. Thankfully, there are natural wonders like the Dune Ming Sha Shan Sand Dune in the Gansu Province of China that can help stir us to pay better attention to the world and help us become more well-rounded individuals.

Dunhuang has an ancient tradition seeped in trade and commerce, once serving as a principal outpost in the Silk Road and connecting China, India, Arabia, Persia and Rome. The Silk Road is a trade route that stretches through China and into the Mediterranean. This route got its name from the primary good that was traded, silk, and bridges many different cultures through their desire for trade.

As we talked about in the case of Estonia, trade and commerce have a way of elevating the lives, culture and wealth of those cities most touched by its powers. Today Dunhuang is a clean, modern city that has developed a strong tourist industry. While the city once had great commercial and political significance, owing to it’s geographical location, it has become mainly a tourist destination today. This is due in large part to the Ancient Buddhist Caves and the Mingsha Shan sand dune. 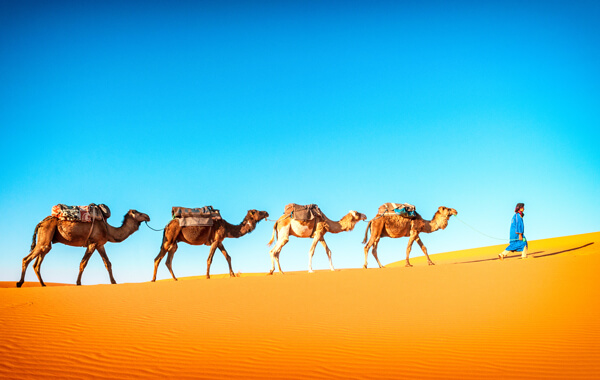 If you are looking for a real sensory trip take a caravan, by Camel, several miles outside of Dunhuang. As you wind across the vast stretches of golden sand listen for the sound of the world talking to you. On a day when the wind is only a slight breeze you can hear the ground beneath you whisper, speaking to you softly, so soft that you may even think the noise is in your own head. If you are lucky enough to come on a day when the wind is howling then the roar coming from the sand will let you know that your ears are not deceiving you.

Nothing ruins an adventure faster than having an adventure reliant on specific preconditions. Such things as lightening ruining a mountain hike, a sunny day keeping the animals in hiding, or a hurricane on the East coast trapping you in a bar in the Midwest. So, if you happen to take your caravan into the desert on a day without a wind, fear not. Simply hop off your camel and slid down the sand dune on your butt. The pushing of sand down the dune will emit a similar roar/ helicopter propeller noise. Have you figured out why the sands are talking? If not, read on below for today’s lesson…

THE SCIENCE OF THE GROANING

According to legend, a general led his warriors into battle at Mingsha Shan, and a great sandstorm buried everyone. The warriors, though continued to fight beneath the sand and it is there groans that you hear today. Unfortunately this doesn’t account for the fact that singing sand dunes occur all over the world. Here’s a more likely story…

Scientists, through science and brainery, have learned that the moaning noise of singing sand dunes actually comes from the grains of sand rubbing against each other. The friction of one grain of sand against another produces small vibrations, that when vibrated at the same frequency as all the other moving grains of sand producing an audible noise. In simple terms, sand rubs against itself and makes music. This is why you can actually replicate the moving of sand down the dune, and the noise produced, by just sliding down it on your butt.

This is a true testament to the power of a thing working together for a common purpose. While one grain of sand is inaudible to the human ear, a billion grains of sand working in unison grabs our attention. This is an important piece of any individual’s informal education. Sometimes one voice isn’t enough. Sometimes you need the voices of ten people, a hundred people, or a million people to cry out in unison and grab the attention of those who choose not to listen to what we want for our own lives. And in our vibrations we can produce a frequency of change.