High above, and outside the city of Rome there is a mansion of decadence where you can avoid information overload. From the park bench outside of the mansion you can look towards the octopus city of Rome that spreads with large tentacles. Here you can watch the sun set on the epicenter of the old Roman Empire and reflect on what you have just experienced.
Villa de Este overwhelms the other big site in Tivoli worth visiting- Hadrian’s Castle. While Hadrian’s Castle is a skeleton from the past, Villa D’Este is a never ending room by room tour through art, history and architecture.

Built by a scorned catholic cardinal with more money than a man of God should ever have, D’Este is a house turned into a piece of artwork, a quiet retreat from the scrabble of Roman politics and bureaucracy. Walk the rooms one by one, taking in the historical murals, frescoes or religious stories painted on walls and ceilings. Even more impressive than the inside is the outside. 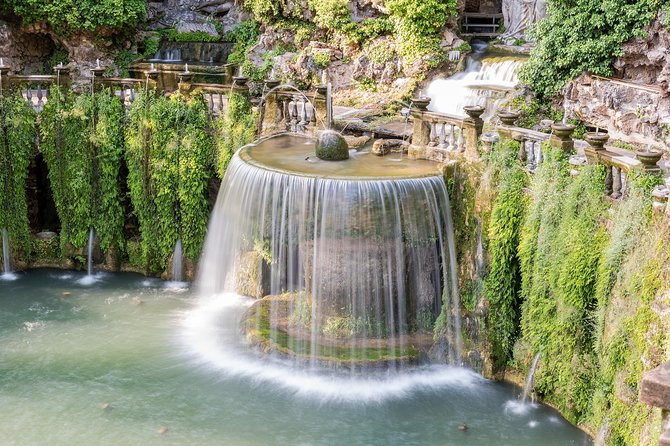 This is a Roman trait, exaltation of the outward. When Rome fell into corruption and self-destruction it shifted its focus outward. The teachings and lessons of great Romans were forgotten, giving  way to grand sculptures, gilded mansions and decadent appearances. 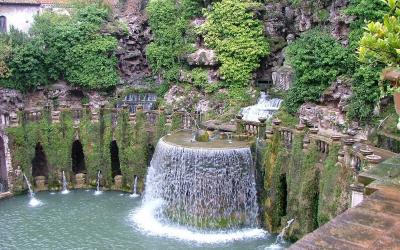 When a culture turns the corner from feeding its mind to feeding its ego the downfall has started. What good is eating the freshest food or keeping the nicest appearance when you fail to improve your mind? Are you still alive if your body is healthy but your mind can’t think?

Outside Villa D’Este one pool plunges into another, the second filled with shiny fish that glisten when the sun hits their slithering scales just right. 100 heads form a fountain walkway of faces that spew water in rhythm. There are gardens filled with scented, colorful flowers and statues to nymphs and other playful creatures.

Positioned on the side of a great hill, this estate is a place of reflection. Coming here, your senses escape through beauty and art. Your mind shuts off for a moment, powering down and relaxing after the stress of visiting Rome.

Details here are intentional and thought out. You need not overthink things, or flood yourself with too much information. Just enjoy. Take in the sound of water splashing over a waterfall to a pond fifteen feet below, or the slap of water spewed from a fountain’s mouth to a trough below.

Then, when you are content and relaxed, walk from D’Este to the park bench outside. Sit, and watch the sunset bury the city of Rome first in orange then in black. This view, this experience from a lowly wood park bench is just as profound as Villa D’Este.