Let’s face it. Everyone has something about their physical appearance they want to improve on. Did you resolve to get a 6 pack ? Are your arms getting a little flabbier than you care to admit? Have you lost that 20 pounds you promised yourself you’d lose by summer?

Keeping in good physical shape is a constant battle, especially if your life does not march to a routine beat. We travel a lot, and that means our work schedule and daily routine is constantly disrupted. It’s hard to maintain a regular workout schedule when driving 10 hours, flying through airports, and going to meetings and gatherings break into that normally allotted time frame. The hustle and bustle of changing places means your body gets all out of whack, and your whole routine is shot to hell.

Maybe you don’t have the same problem we do with an ever-changing location. Maybe you just have an exhausting schedule and the idea of achieving that prime physical shape gets pushed further down on your list of priorities.

The solution…plan a trip with a bunch of friends.

After careful investigation, experimentation, and dedication we found that there is no better way to kick your butt in gear physically than planning a trip that exposes you. Yep, I mean get out that bikini, find your short shorts, take off that shirt, and check out your beach body. Of course, if your friends are true they will never put you down for your physical appearance, but they will be the first to let you know if your baby keg of a belly is killing the beach mojo. It’s for your own good.

Setting a trip to a hot, minimal clothing required destination gets the ball rolling. First go try on your beach gear and literally check yourself out. Satisfied? (For those that are satisfied, here is your round of applause………………………………… now go read a book or something because the rest of us have work to do.)

If you are anything like the 99% of us who are not fully satisfied with that mirror you just looked in, your priorities will be changing. Everyone of us likes to impress our friends even if we don’t admit it. We want them to notice our efforts and our physical appearance. Yea, you look at them and compare, just admit it; and they look at you doing the same. It’s silly to say, but this social competition is normal. It’s also very helpful in achieving your goal if used correctly. 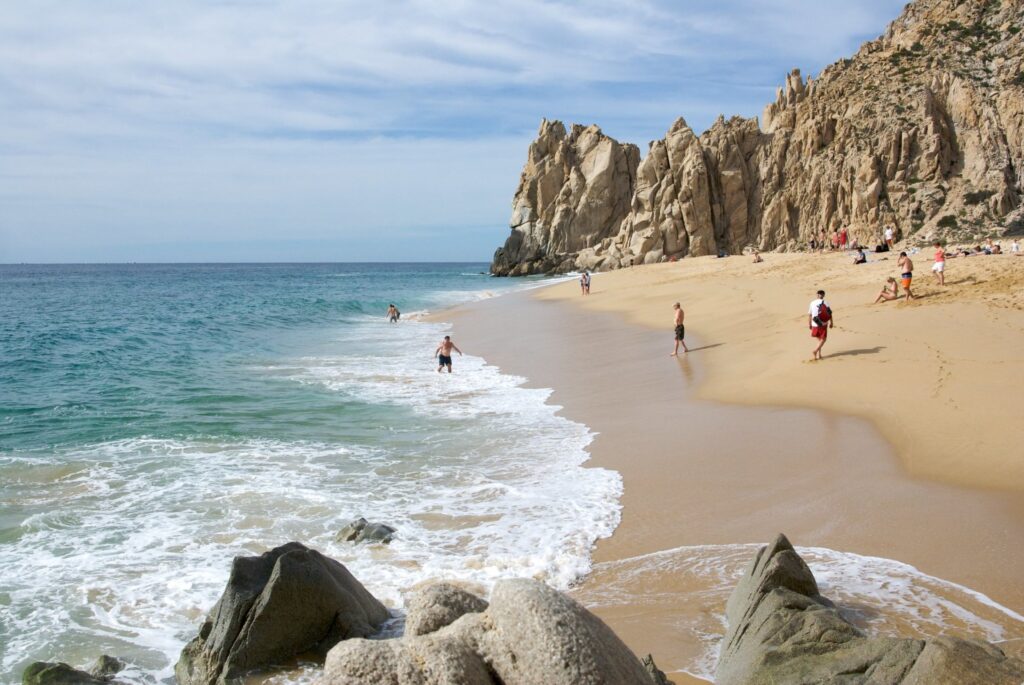 This idea of using social competition to better our physical appearances came about because of a beach trip to Cabo, Mexico. Our friend was turning 30 and decided he wanted to celebrate his birthday on a beach with his friends. It was March when this trip was birthed, and most of us had spent the winter under layers of snow pants, ski jackets, and wool socks. Our winter bodies tried to insulate us with pockets of fat in places not to be seen until July. The trip was planned for April. Mirror mirror on the wall, who’s that fatty reflecting back?

We knew our friends felt similar after talking to the mirror, so we decided to take action. What’s the best way to lose weight with a group of travel friends? Team support and working out together…no. Setting up a group eating plan…no. Joining cross fit together…hell no. Obviously, it’s betting against each other and taunting the losers into buying drinks on the beach. AKA a competition.

The challenge was established with some good trash talk and taunting. We decided to use a point system that left it up to the individual to be honest. (After all, if you aren’t capable of being honest about your health you weren’t going to improve anyway) Each week points were awarded for working out, not eating sweet treats, drinking sufficient water, and limiting alcohol consumption. Everyone also picked a personal goal, and if it was achieved extra points were rewarded. On the surface this seems simple enough. We even allowed one complete cheat day and a max of 5 workout days. Everyone agreed and the battle was on.

Personally, I thought this challenge would be a piece of cake. Well the cake became the hardest part. Do you realize how many sweet treats Americans are taunted with every day? Pop tarts, sweet rolls, energy drinks, candy, ice cream, pop, cereal, and CAKE!  I didn’t think I ate very many sweets until I realized all of the foods I couldn’t have thanks to this challenge. And then there was my family get-togethers that really tied my hands. Cake for my nephew’s birthday, lemon bars for a spring treat, and cookies because we haven’t seen you in a while. Ahhh sweets were everywhere!

Somehow I survived the first week without having sweet treats. I made it to the cheat day where I consumed as many sweets as I could. Funny thing about changing your diet is your body doesn’t really appreciate you right away. Even though I looked forward to every cheat day I had, I felt absolutely horrible afterwards. By the last cheat day I think I had such an aversion to feeling like sugary crap that I only ate one sweet treat.

We ran the beach bod challenge for a month. Using friends and health competition as a way to keep yourself on track with a diet or workout plan works better than other methods used in the past. The key factor is accountability, or being shunned by a group of your peers for not sucking it up and competing. The winner was to get free drinks for a day while in Cabo, paid by the losers. Who won? Well that’s a story that stays in Cabo, but I will say chasing the worm is no easy race. But, if you are looking for a way to keep on track with your health, and remain accountable to more than just yourself (which does increase our chances of success) then try a social health competition.

HOW TO SET UP A SOCIAL HEALTH COMPETITION

Setting up a health challenge is simple, and requires nothing more than a shared good doc and a list of things you want to work on. For us, we wanted to lose weight and look good (workout), and eat healthier (limit sugar and alcohol). These ended up being the main judgment points for our competition. These can vary depending on your health and fitness goals.

For this sort of competition we found the easiest thing to do was use a points system that rewarded positive action taken. For example, working out got you one point (with a maximum of 5 points capable of being earned in a day).

Bonus points could be earned by accomplishing some longer term goal (losing/ gaining a certain amount of weight, getting a 6 pack, running 4 miles, etc.) So participants were rewarded for both regular fitness and nutrition and also going above and beyond. Ultimately, if you are competing with a competitive group the bonus points, or going above and beyond, are going to separate the winner and the losers.

Finally, have 1 cheat day a week where you can eat and drink what ever you want and reward participants with a point for that day as well. Human’s only have so much will power and resolve so channel that to a certain day and allow participants to “break the rules” without feeling guilty. (feeling guilty, leads to binge eating or not working out, which leads to giving up on the challenge or goals)

Overall the challenge was successful. Not everyone fully participated which is fine, but those that did said they actually felt improvements. The challenge and the beach itself was motivation. It gave fitness and nutrition a purpose. Hopefully it may also provide a long term ripple. Much like the effect sugar had on me, we can train our bodies to want the healthier choice. Working out and choosing good foods is just as habit forming as being lazy and eating junk food. It’s your choice, but I suggest a beach bod challenge to get you started!