This post is sponsored by our outdoor friends and experts Roads, Rivers and Trails.

People often think Colombia is a dangerous place because of drugs and sex-trafficking. That is still a strong possibility, but I’m willing to bet there is more potential danger in simply walking the streets by foot. Not because of dangerous drug dealers, pocket thieves, or rapists. Not because it’s easy to get lost or end up in a bad neighborhood. Walking the streets of Colombia, specifically Barranquilla, is one of the most dangerous threats to tourists because of the rabid taxi drivers. I love them, but fear them all in one package. It is not just the taxi drivers that present danger, but all forms of ground transportation like motobikes, buses, vans, and even bicycles are mobbed into this system of chaos. For purposes of this article, however, I’m picking out the most dominant, most noticeable, and most populated of the ground transportation, the yellow taxi.

Now BT is an adventurous group. We like trying new adventures like shooting guns in Estonia, climbing mountains, seeing the horrors of humanity and going on pilgrimages but we we’re not in the least prepared for what we were about to encounter in Colombia. 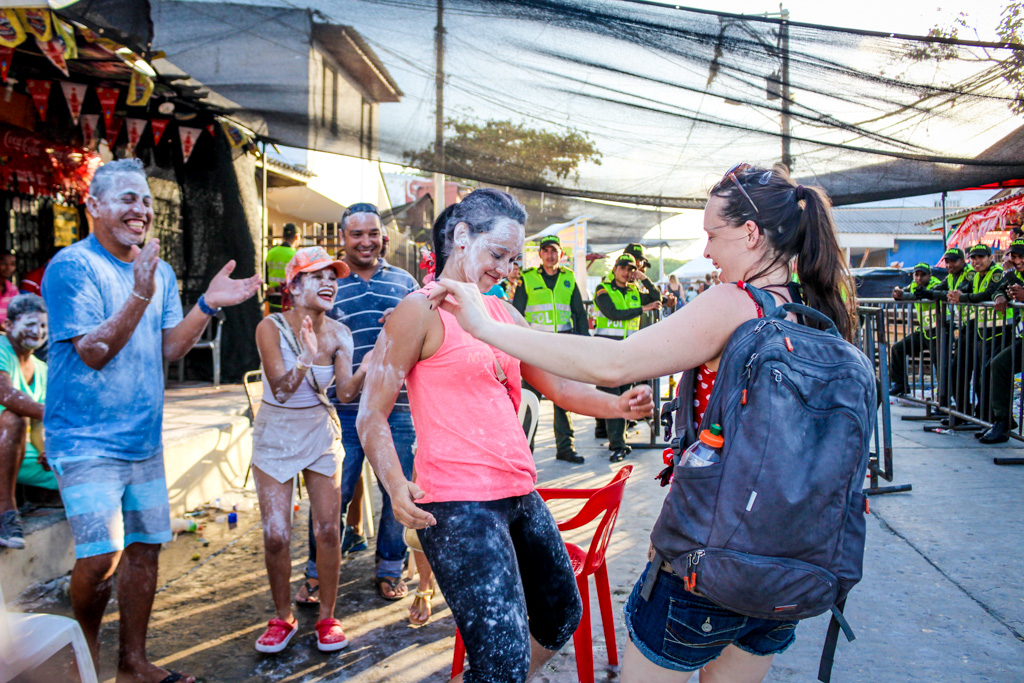 Let me paint you a picture of my very first taxi ride in Barranquilla, Colombia:

(11:30PM and I have just landed in what appears to be the smallest, oldest, smelliest airport in the world)

(Mind you this is all in rapid Spanish as well)

“Where to?”
“Hotel la Casona” (I hand him the address)

“Sure, Sure I know the area, good part of town”
(He buckles up…so we buckle up)

1st gear, 2nd gear, 3rd gear, the engine growls
STOP SIGN, He slams on the brakes while shifting to neutral.

We turn left and the tires shriek.

1st gear, 2nd gear, 3rd gear, 4th gear
INTERSECTION, He chunks down to 3rd gear, looks both ways and guns it back into 4th.

4th gear and we are whizzing by rickety buildings.
STOP LIGHT, He slams on the breaks, throws it in neutral glances each way, sees a slow-moving van coming from the left and guns it through shifting back into 3rd as we launch forward.

(If I were to guess we probably averaged 45 mile/hr speed for every drag race we completed…who were we racing? Everyone and Everything!)

He whipped a U-turn, avoided the homeless guy laying in the middle of the street, passed a slower taxi, honked at a street sweeper who was crossing with his barrel of trash, pulled one more u-turn from the wrong lane going the wrong direction, and we were there!

Fastest 20 mile taxi ride I’ve ever had, and it only cost $15 and that was tipping him generously.

It was midnight by this point so I thought, hey, maybe it’s because there is no one on the streets and taxi drivers are the only ones brave enough to roam the streets. Or, maybe he really wanted to be done working and we were his last customers for the night.

The next day I learned those theories were like saying “pigs can fly”. They just have no traffic rules. Pass whenever, wherever possible, honk if someone is in your way, going to slow, about to be in your way, or you want to pick them up. Stop signs and stop lights are unnecessary and speed limits are in a foreign language.

It is one thing to be riding in this chaotic mode of transportation, but it is another to view it from standing street level. In order to help diminish the Colombian stigma of lurking danger I’ve developed a how to list for safely walking the streets of Barranquilla. Apply these rules and safety tricks at all times and in all Colombian cities (but especially Barranquilla) in order to stay out of the statistics of some of the most dangerous cities in the world.

Final words of wisdom: Do not lose in the game of Frogger, unlike the computer game you do not have another life to try again. Now go forth and own the streets of Colombia like a Lord!