Putting the war aside, I would like to touch on a few things about Vietnam and the people. Please keep in mind it was War time and this country had been fighting off intruders or occupying armies since forever. The cities and villages were nothing like I imagined The huts (we called them Hooch’s) were small and, to be honest, I would not have wanted to spend a night in one. Only once did I get to a city with real buildings. I spent 2 weeks in Vung Tau (an in-country R&R base and training center on the South China Sea shore) and I went into the city a few times just to see how the “city folk” lived. It was very primitive, plumbing was more or less where you would find it, usually an open air sort of thing. They cooked on open fires inside or out, they had some electricity but it seemed unreliable and refrigeration was mostly done with “block ice” when done at all.

I was stationed with a helicopter unit at a base camp near the city of Tay Ninh. It was called Tay Ninh West and was just 10 or 20 miles off the Cambodian border. I only got into the city once or twice. Since there was so much VC activity that close to the Cambodian border the city was mostly off limits. The once or twice I did get into the city I went to see the famous Cao dai Temple. It was truly a beautiful temple. I could only view it from the outside, as the inside was strictly off limits to anyone other than those of the Cao dai religion. Back at base camp, our flight line was in alignment with that temple, and even the airspace above and around it was off limits. When we flew missions out of Tay Ninh we had to sharply bank East to avoid flying over the temple. 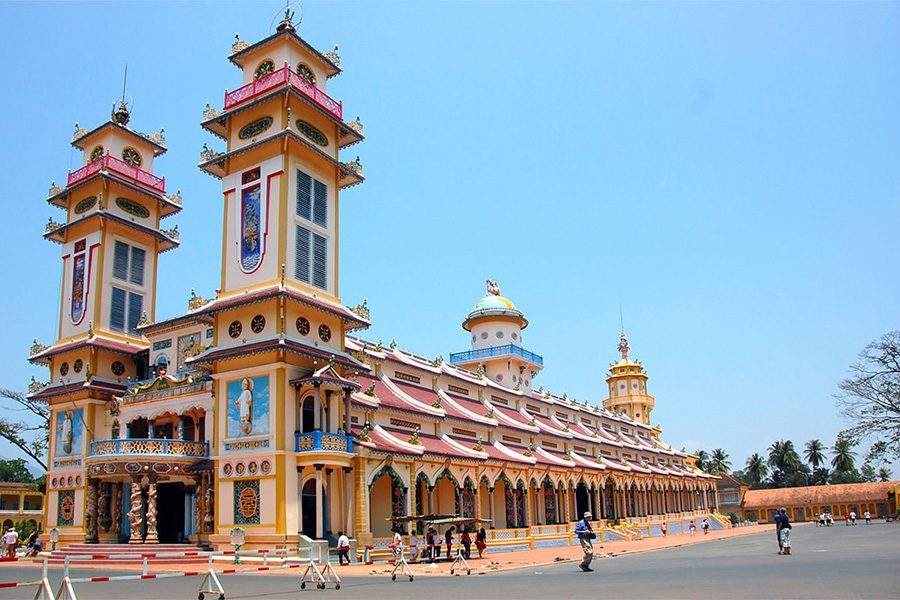 The villages surrounding Tay Ninh were just like any other village, smelly, small and full of the hooch’s I would not have liked to spend a night in. In some cases, livestock, like pigs, chickens, and other smaller animals lived in the hooch’s with the human occupants. For a 19 year old “kid” who was fortunate to be born in America, the 15 months I spent in Vietnam was a huge culture shock to me, a shock that is still with me today. I found that the people of South Vietnam, men, women and children, were almost like any other people, with the exception that they lived in a war zone. It’s true that some of them would steal everything but the fillings in your teeth, but it’s also true that most of them liked us, were openly friendly towards us, and would work like a horse for us. The children were always present, they asked many questions (those that understood English) about America, and most of us tried to give them anything we could. They were masters at survival and part of surviving meant that they would scavenge (some referred to it as stealing) anything and everything. If we gave them basic things like food, (extra c-rations, which there were plenty of those around) candy, cigarettes, toiletries like soap, tooth paste and brushes, and snack stuff like cookies, then they wouldn’t scavenge from us.

After I had a month or so left in-country I was taken off flight duty, and went to work in the motor pool. Quite a few times I went on truck convoys to other base camps (CU Chi comes to mind) to pick up helicopter parts. During a convoy we went through many villages and saw some beautiful scenery. Vietnam is actually a beautiful country when you can see past the war and destruction. Rice paddies were everywhere, and to see how they were worked was like something out of a movie.

Everything was done without machines, they planted by hand, they used Water Buffalo to pull the sledges and they cut the rice by hand. The main mode of transportation were these small 3 wheeled Cushman carts, small motor bikes, like the old Honda 50’s, and of course the Water Buffalo pulling wagons. They could put as many as 3 or 4 people on these small motor bikes, and they could load a 3 wheeled Cushman to the point where it seemed like it would tip over. The Water Buffalo carts were loaded in the same manner and carried just about anything and everything. Every now and then it would get interesting when a column of tanks or self propelled artillery guns would approach oncoming carts. Sometimes it would be like a Mexican standoff, as in , who would let the other one go by. Usually, the odds were in your favor if you were in a tanker. They didn’t like getting off of the “main road”, as the VC would bury some very nasty explosive devices off road.

So this ends my little story about a journey into a country that seemed frozen in time, an ancient time. My tour lasted almost 15 months and in that time I received the education of a lifetime. Most of that education is still fresh in my mind. The people, customs, villages, and their way of life in a War Zone. I have other memories as well, those memories are also fresh in my mind, like they happened just yesterday, but that is another story for another time.