Portugal produces the world’s only authentic port wines. In fact, the port is the most popular wine made and exported from Portugal. The modern culture of port wines makes most sense only when first looking at the past, as many historical events raised the Douro region and its grapes into the viticultural world and gave port wines the distinct taste and creation process that exists today.

Portugal’s inhabitants have produced wine since 2000 BC. When the Phoenicians arrived around 10 BC they brought with them new winemaking techniques and grape varieties that exploded the grape growing and wine producing in Portugal.

Portugal has a long history of exporting wine to Britain. But, the location and convenience of getting wine from their closer neighbor, the French, swayed Britain to rely heavily on wine imports from France versus Portugal.

The creation of Port wine stems, like many things, from the desire to drink alcohol. In the 17th century, when the French were considered a world power and were in the middle of a war, they imposed a high tax on wine exported to Britain. Desiring a cheap alternative, Britain looked to Portugal, specifically the Douro Valley.

The Douro Valley is located along the Douro River, a region noted for its Mediterranean climate: dry, hot summers and cold winters. Grapes from the Douro region are used to produce two types of wines: Port wines and table wines. Port wines were created in the 17th century as a solution to the problem of wine spoiling on the journey from Portugal to Britain. Portuguese winemakers cleverly added brandy to their wines to stop the fermentation process, and in doing so, birthed a new wine: The Port. 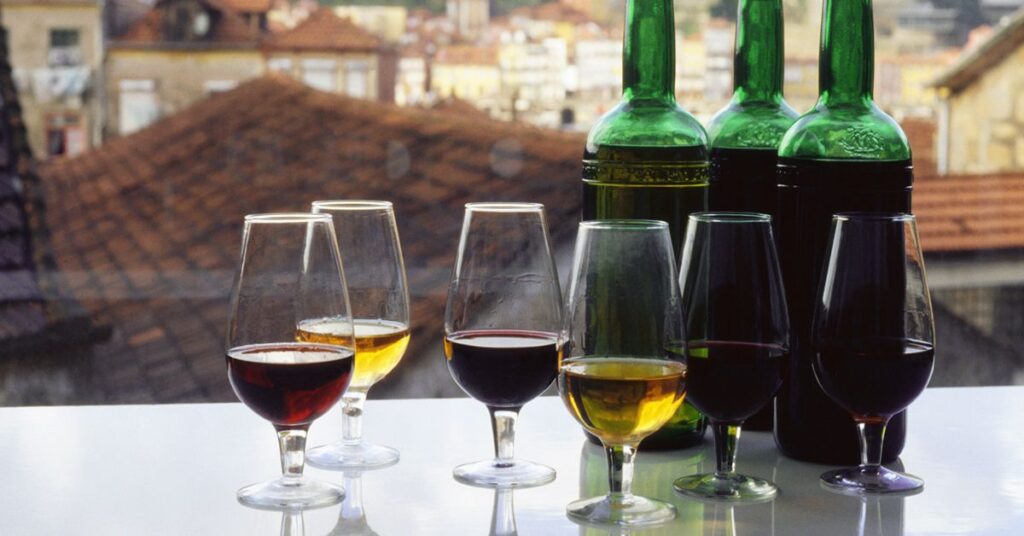 WHAT IS PORT WINE?

Although this wine is sweet like a moscato wine, the two should not be confused, as they are very different in creation, body, and taste.

A port wine is a fortified wine made from grapes only in the Douro Valley. Legend has it that two vintners stumbled upon a monk adding Brandy to his wine in order to preserve its sweetness. The brandy kills the yeast within the wine, which is the main ingredient responsible for the fermentation process, and hence preserves much of the grape’s natural sugars. The end product, a stable, hearty wine with a much higher alcohol content, survived the long ship journey to Britain and quickly gained favor in Britain.

Ruby Port is the standard port wine, easiest to find, and usually the cheapest to buy. During the fermentation process the wine is usually stored in stainless steel barrels.

The Tawny is a blended wine that gets a brownish-gold color from the oxidation that occurs in the wood barrels the wine is fermented in.

This is a non-traditional type of port wine made with white grapes. White ports are best served slightly chilled and as an aperitif.

Unfortunately the Douro Valley vineyards and wine-making facilities are far from each other, which is why we suggest skipping the vineyards and heading straight for Porto, a world heritage UNESCO city and the heart of Port wine-making. Dotted along the Douro riverfront are over 50 Port wine lodges. Not all of the lodges are open to visitors, though, which is probably a good thing. Below, we’ve listed a few noteworthy ones that make up an excellent port wine tour.

This wine-maker, although not one of the oldest, formed in 1859 under the marching orders of exporting their wines only to Brazil in exchange for exotic woods. For four generations this company remained family owned, until drink distribution and production conglomerate company scooped it up. Today, Calem remains one of the most well-known port wine companies in the world. Come here and learn about the history of the Douro Valley, visit the cellars, and top it off with a glass of port on the terrace.

Robert Cockburn, originally a Scottish soldier, campaigned in Portugal in the early 1800’s. While traveling across the country he made his way through the Douro Valley and discovered its wines. Right then and there he vowed to return to the area someday and live there, immersing himself in the wine-making culture. Several years later, when the fighting was over, he returned and opened up a port house. Cockburn’s is now owned by the same family that owns Graham’s, the Symingtons http://www.symington.com/. They have been in the port making business for five generations.

This Portuguese wine-making company owes two Norwegians, Theodor Weisse and Dankert Krohn, for it’s existence. Weisse, realizing the firm was too small for two owners sold his share to Dankert and remained on staff as a commercial agent in Norway, where he helped herald in a new age of economic progress for the company. When Dankert died the company continued through the hard work of his widow, daughter and two employees. 70 years later a Portuguese owner finally controlled the company, a company that still retains its Norwegian founder’s original name.

Taylor’s is also located lodge high on the Gaia Hill with a spectacular view. One of the more interesting things of note about Taylor’s is a port wine called Scion. Scion is the oldest port in the world. In 2008, Taylor’s wine maker found a very old, cask aged port. So old in fact that it dated back 150 years, before Phylloxera ravaged Europe.

Phylloxera is a small parasite that sucks the sap out of grape roots. In late 1850 individuals were importing grapes from North America to Europe, and with it bringing this small parasite to the unprotected grapes of Europe. The end result was the destruction of all and any authentic European Grapes. Today European varieties still exist, but they are joined to North American, Phylloxera resistant rootstocks.

Scion is one of the few, perfect, pre-phylloxera age wines still left in existence. Taylor’s does sell this wine as a limited edition item to collectors for a pretty penny. But, even if you can’t afford a bottle, reading the full story is worth a visit to Taylor’s.

William and John Graham originally started out trading in textiles. In 1820, as payment for a debt, they accepted 27 barrels of port wine. From then on, presumably after drinking all of the barrels of wine, the brothers devoted their energy to making the best port wines. Today, 200 years later, Graham’s is still an independent family business. You can tour this wine lodge and try their wines. This lodge is a must visit, as it sits high on a ridge above the Duoro River on Gaia Hill, which is opposite Porto. The lodge is still a working cellar, so revel in the opportunity to watch blenders collect samples from the over 3,500 casks and 40 oak vats before visiting the tasting room and sipping down a few samples.

Just as famous as this port is the history behind their logo. In 1921, George Massiot Brown approached Sandeman looking for business. He was commissioned to design some posters, and presented Sandeman with their, now iconic, Don. The Don is dressed in a Portuguese student’s cape and a wide-brimmed hat. The ruby port he carries in his hand stands out starkly against the silhouetted character. Although Sandeman didn’t know it at the time, The Don would later become the first iconic logo for a wine.

Situated right next to the Douro River, the Sandeman wine cellar is the most accessible of all wine lodges in Porto. Come here for a chance to see the iconic artwork of The Don, the culture this logo created, and the history behind one of the great port wine houses.

We listed only a few of the wine houses in Porto. For more, check out Porto’s website.